The first Claris Engage, a successor of FileMaker DevCons, was originally planned to take place in Nashville, Tennessee. The coronavirus pandemic has changed plans for most live events this year, and so Claris Engage turned to a virtual experience. We attended, and even participated as a virtual exhibitor, and it surpassed all our expectations. So let us share our highlights of the conference with you.

Here you can see the intro the whole event started with:

The conference format was very simple - 2 days, one track of sessions, mostly 15-minute breaks, free admission. Each day started with an opening session broadcasted live on YouTube, although the content was pre-recorded, and attended by over 1300 people. In the first day’s keynote, following WITfm kick-off coffee break, Claris CEO Brad Freitag focused on the digital transformation topic, the second days’s opening session, led by Srini Gurrapu, was dedicated to the futures of the Claris platform.

The whole event closed with the shortest closing session ever, including awards ceremony, taking only 7 and half minutes, including the 50-second intro video.

But honestly, the above were the least interesting facts about this year’s conference, so let’s take a look at the more interesting remainder…

Attending for Free from Anywhere

All conference sessions were available through WebEx upon free registration at Claris Community. This online format and free admission allowed developers to attend from anywhere around the world. The only constraint for us was that it was taking place at night our time, so it was like a second work shift for us. We attended from our homes and looked like zombies the next day until we got the first cup of coffee… 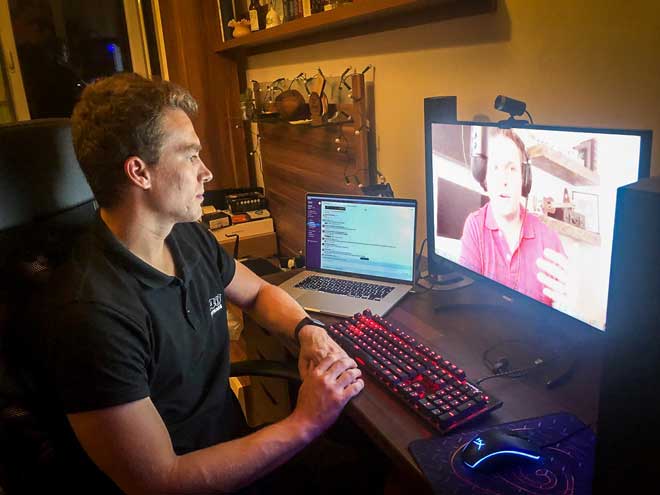 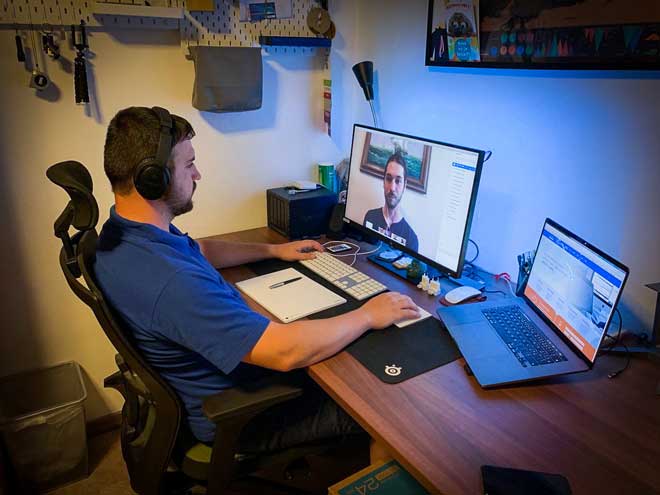 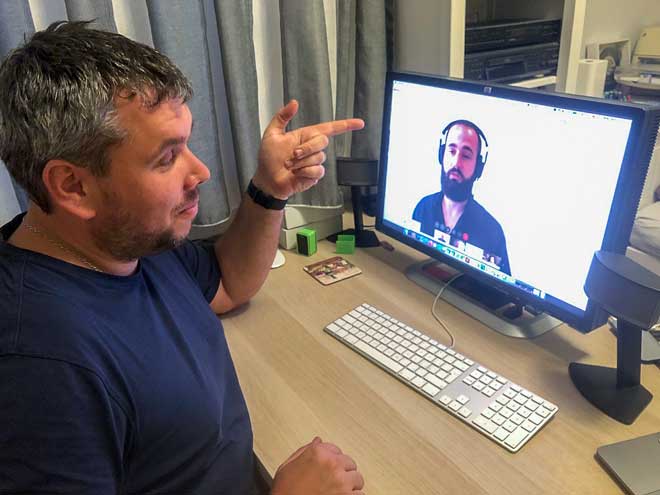 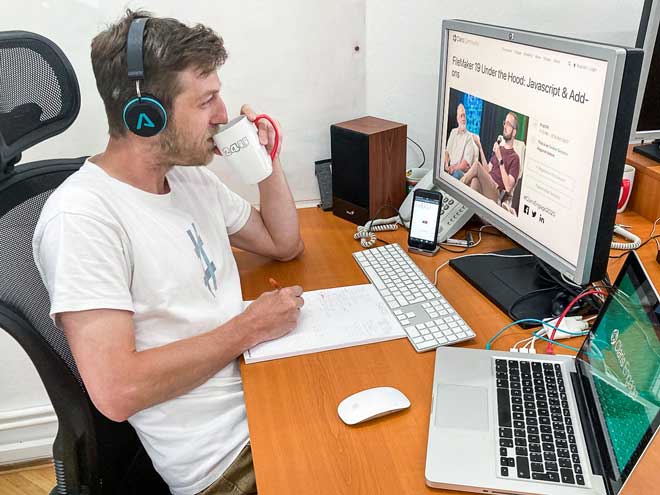 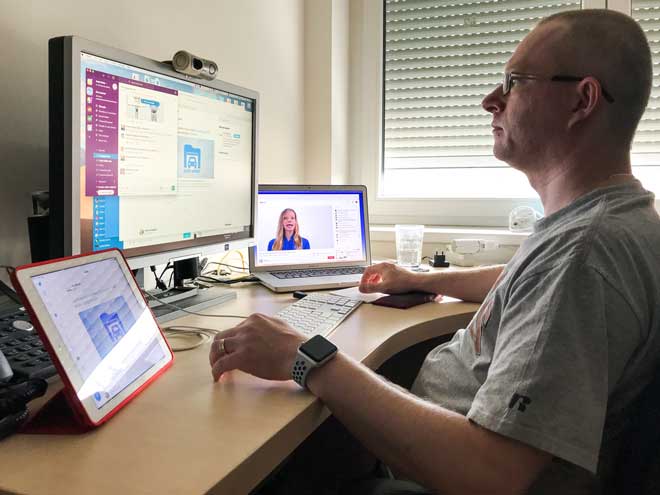 Although the broadcasting environment was prepared to handle 1000 simultaneous attendees, last-minute registrations caused this limit to be exceeded for most sessions, leaving the latest attendees with audio only. The great thing is that recordings of all sessions became officially available in Claris Academy within less than a week after the conference. Furthermore, additional on-demand sessions are being added since then, so you could say that Claris Engage still continues even more than a month after it started…

As a “mad optimizier”, of course, I looked forward to the performance optimization session, and it ended up being my favorite one, revealing that Jon Thatcher is back helping Claris with the new version of FileMaker Server, and that the version 19.1 coming out soon will very likely replace the startup restoration and page level locking features with something a lot more stable but yet better performing as well. See it for yourself:

Every technical session had multiple speakers, mostly using the panel discussion format, which helped them to be filled with condensed valuable content and bright ideas. I would say, compared to any DevCon in the past, this one was extremely brain intensive from session 1 to the very end even for an experienced developer.

Learning from the sessions is great, but the biggest value in every conference lies outside of the session rooms, in networking with the peers, being able to discuss problems and ideas, and even the content from the sessions, with other developers. I even shot a road movie style video about it back in 2011. So I wondered what the virtual conference will be without this experience. Until Geist Interactive came up AutoEnter.live, the “Claris Engage Watch Party and Virtual Trade Show”, just about a week ahead of the conference. 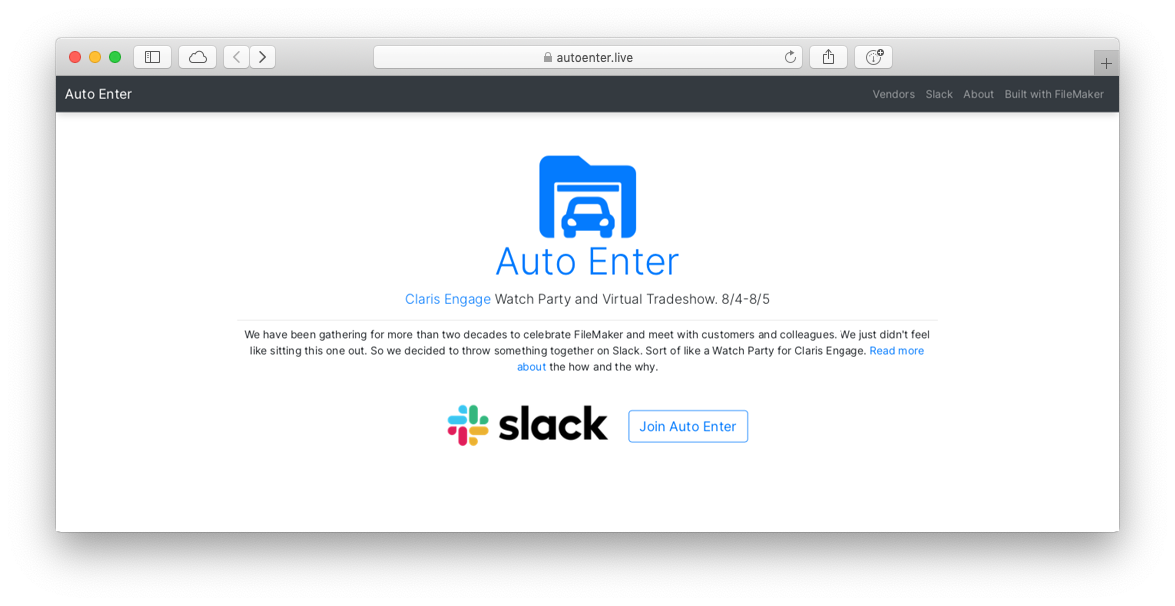 They simply started a temporary Slack workspace that lasted only a few days, but it literally re-created the traditional DevCon networking atmosphere in the virtual online world. It might have been even better, because you could be at the session and in the lobby with the peers at the same time. We were all so lucky to have at least two screens, so we could enjoy this experience.

People were commenting and discussing the sessions in real-time in the Slack channels. There were technical discussions, bright ideas inspired by the session contents, and even a lot of fun. It was literally almost like being at the conference venue physically. What I found even more pleasant was that Claris managers joined us and had fun with the rest of the attendees.

Kudos to Todd Geist and his team for doing this!

Part o the AutoEnter.live was also a “virtual trade show”. Everyone, who wanted to “exhibit” at Claris Engage, could provide a logo and description and get a special vendor channel created in the Slack workspace. So we did and I was there most of the time, thanks to my third screen, my iPad. Although being at three places simultaneously was a bit challenging… 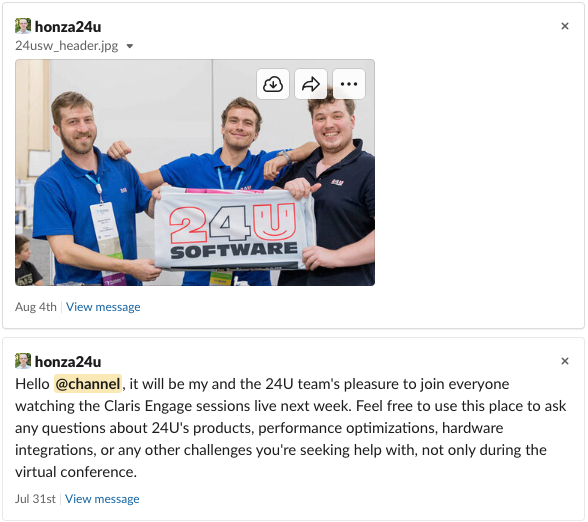 Our main topic for the booth was hardware integrations and we got some really interesting discussions going on. One was about feeding FileMaker system with data coming from autonomous vehicles via an Android app. There was a little bit about IoT, but the biggest interest seemed to be focused on inventory and asset tracking through high-performance barcode scanners and RFID readers.

We have worked on various hardware integration projects, so we could even share some pictures of devices we are currently integrating with FileMaker… 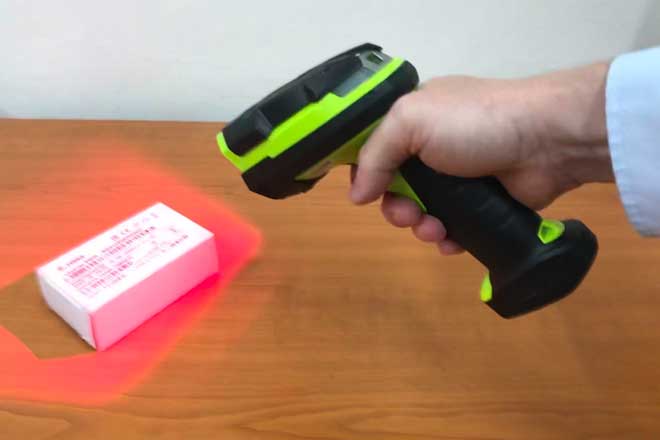 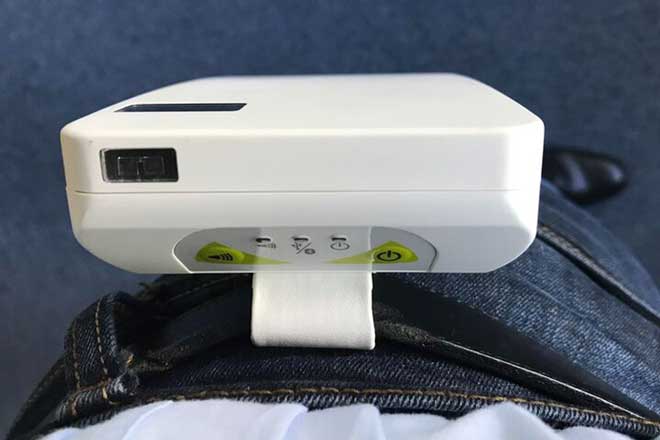 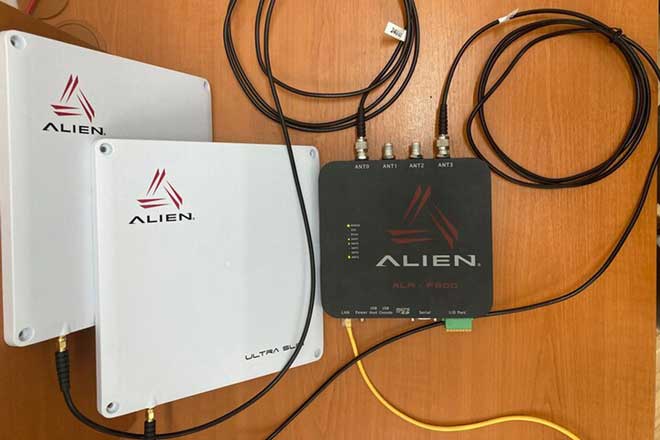 The conversations I had during the conference further confirmed two things I keep noticing for the last few years. First one is that it still makes sense to use hardware barcode scanners, even though we can now scan barcodes with the iPhone camera natively in FileMaker Go, and that the RFID is on the rise in the small business world, even though it exists as a technology since 1946.

Thanks to everyone who came to visit our virtual booth, even if just to watch the discussions without participating.

Finally, everyone attending a conference wants to take something valuable away back home. In the best case it is new knowledge and new ideas to apply on real projects.

To get the most out of our participation in Claris Engage 2020, each of our developers has prepared a demo or example going deeper into one of the topics presented in the conference sessions. Then we organized an internal followup mini-conference to share the demos and discuss how we can immediately apply them to the benefit of our customers. 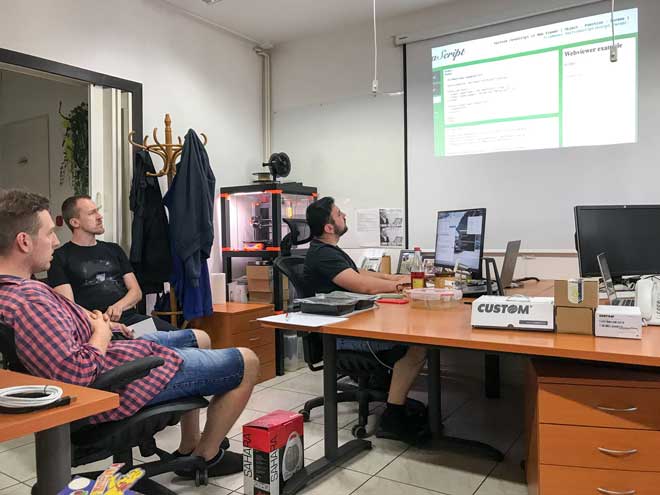 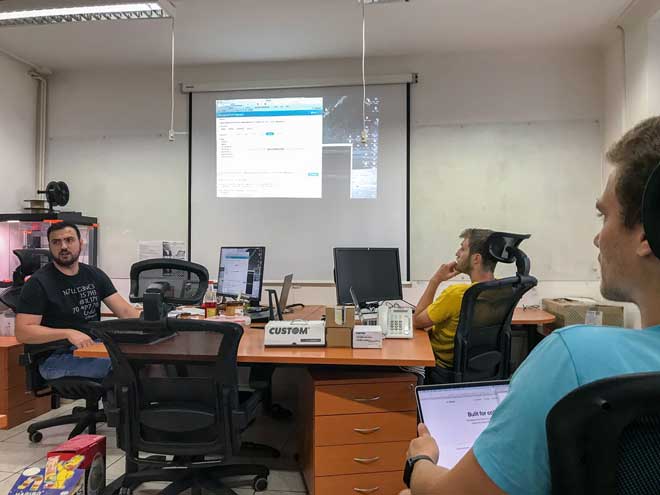 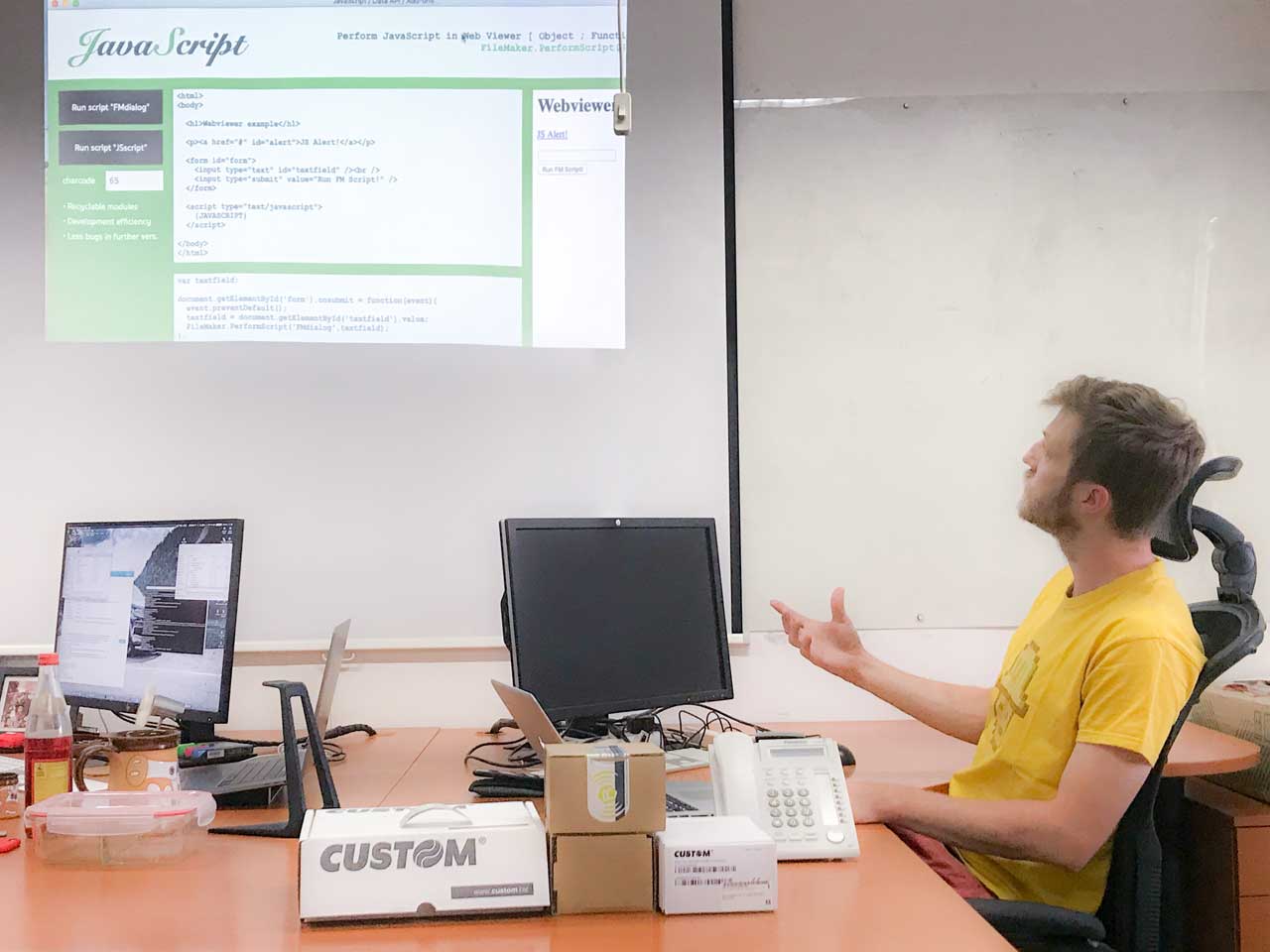 Every topic was great but two really stood out - JavaScript and Add-Ons.

Leveraging JavaScript in FileMaker solutions is nothing new for us, but FileMaker 19 has made it easier to implement by at least one whole level. One extremely valuable thing we found out when experimenting with it is that the new “Perform JavaScript in Web Viewer” script step can be used even with a Web Viewer objects that’s in the grey zone on the right, outside of the visible part of the layout.

Add-ons quickly made fans within our team. We not only discussed them as a way to build an internal collection of reusable building blocks for stuff we use over and over again. We even found them to be a convenient way to deliver some modules we create as a sub-contract work for customers who have their own developers but hire us either as an external capacity or as external experts in the things we have a lot of experience with, such as optimizations, software and hardware integrations, mobile apps, etc.

There’s no doubt that getting engaged by and in Claris Engage 2020 was both entertaining and valuable even in the virtual format and we all look forward to the next conference, where we will hopefully meet many of you in person again.